You have no items in your Shopping Cart.

Our dear friends, Donna and Joe's wedding took place in a farmhouse on the Central Coast of California. It was a mix of fun and elegant with plenty of handmade touches. Joe silk screened the invitations, save the date cards and programs on kraft paper. This helped set the theme for the coasters, mini and beer labels. 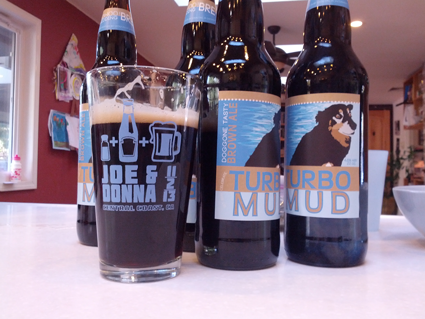 Our wedding gift was helping to enough brown ale for both the wedding reception and the rehearsal dinner. They had a mix of bottles and kegs for serving beer. The goal was for their pieces to match the feeling of the silk-screened invitations in color and style so they worked with a friend to design and upload their own. 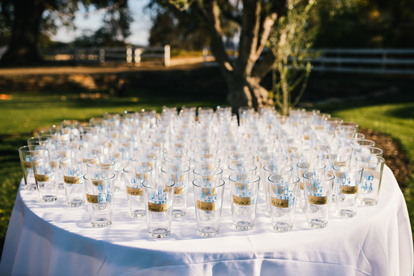 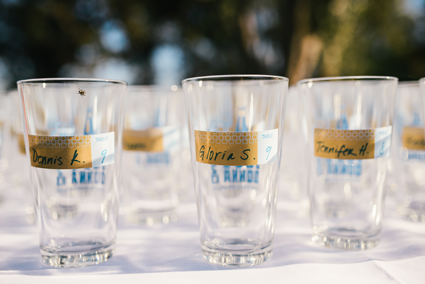 They bought silk-screened pint glasses from a glass company but were worried that everyone would mix up/lose their glasses (not good since that was each guest's glass and favor.) They were also looking for a clever way to do their escort tags. The solved both issues. were designed to leave room for a name and a table number. the guests names and table numbers gave Donna the flexibility for last minute changes as well as making each one more meaningful and personal. Having name tags on the glasses at a large event is so helpful! I set down my glass to hug an old friend and could pick it out easily from the 4 other identical glasses sitting on the same table. When the wedding was over and we took our glasses home, the mini-tag removed easily and cleanly — no scrubbing required. 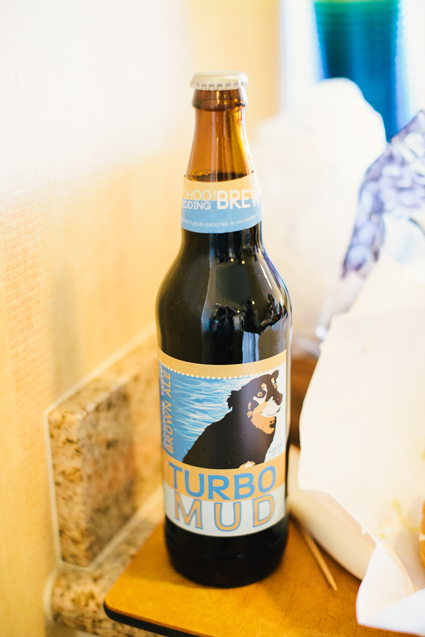 For the 22 oz beer they used the custom upload square with necker label. Many guests were seen taking bottles home or peeling off the labels as keepsakes. 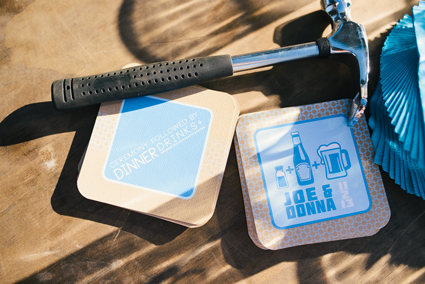 Finally, they uploaded a double-sided coaster to carry the theme and add pops of color. It made a fun and useful the bar areas.

Very shortly after I proposed to my longtime girlfriend I knew that I wanted to incorporate my homebrew hobby into my wedding. Let me introduce myself, my name is Kevin Torok. (Editor's note: Kevin worked at GrogTag in 2014 before leaving to mold young minds as a teacher. Bet chemistry class is fun with Mr. Torok.) I wanted to share my experience brewing beer for my wedding and using GrogTag to help me showcase the beer to my guests so I decided to write about the entire process in the hopes that people can learn from my mistakes and successes. 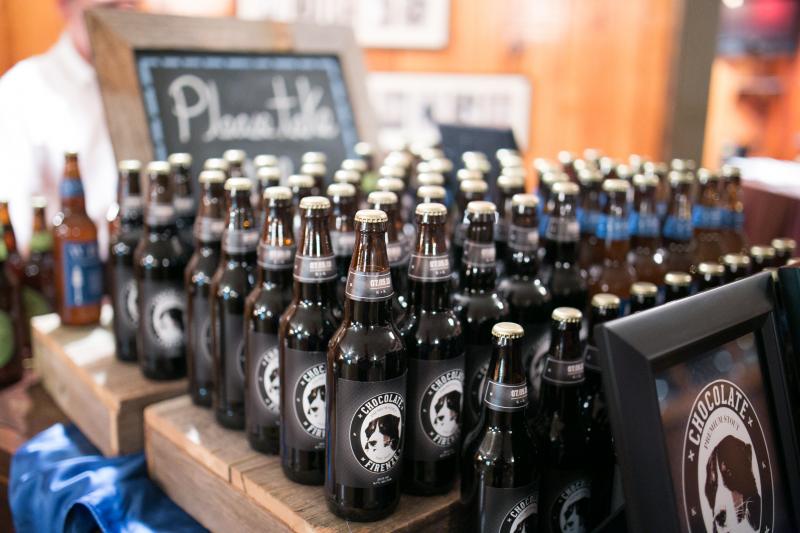 I decided on giving out 22oz “bomber” bottles as wedding favors instead of something more traditional. Hand brewed, hand bottled using recycled bottles, made using recipes that myself and my future wife would create, I knew that it would set our wedding apart from other weddings and give the guests something to remember. It also would be a lot of fun for me and give me an excuse to scale up my system for the brews.

It took a long time for me to decide on recipes so I only had time for one test batch before brewing the three different beers I would use for my wedding favors. I took the whole thing so seriously; it really felt like I was starting my own nano-brewery. Considering that many of my wedding guests were not what you would categorize as craft beer drinkers I had to make sure that there was something for everyone. Once the recipes were finalized I spent many hours brewing with my fiancée. Three separate batches in order to yield enough beer for our 150 anticipated guests. I also used the process as an excuse to upgrade my gear. I got a bigger kettle, built two separate fermentation freezers, built a larger mash tun, and a large bottle tree. I had to source 160 bomber bottles to use because I surely couldn’t afford the $12 per case for new bottles. That meant going to local bottle shops every couple weeks and hitting up all my brew club friends but I eventually found enough.  So the beer was fermenting and my wedding date was drawing near, I just needed a way to make my beer look as good as I thought it was going to taste.

So I went label shopping. I researched several options, printing at home, going to a local print shop, or go to one of the several websites that offer the service. I had yet to start my GrogTag job so I wanted to make sure I spent my money wisely, with my budget already being stretched thin from all the wedding expenses. I settled on GrogTag for several reasons: First, the pricing was very competitive compared the other custom beer label sites. Second, the quality of the website just blew the competition out of the water. website made the others look like they were designed in 1995. The slickness of the interface and the style of the label designs informed me that this place knew beer labels. The third reason I went with GrogTag was that the label was meant to last. Write-on able, reusable, able to withstand long stretches in a cooler, none of the other labels came close to that performance.

So I went with GrogTag, now I needed to decide on three different designs. I played with the website for hours, trying out different labels, uploading different images until I narrowed it down to a few options that I could pitch to my fiancée. She liked them a lot but wasn’t quite sold on what I had come up with. She said, “They look great but they don’t look like us”. We were in luck though; a friend came over and brought his significant other – who happened to be a graphic designer. In an hour we had whipped up a custom label design that took the theme straight from our wedding invitations. One out of three labels were complete! We only had four more days to complete the last two designs but my highly efficient and motivated graphic design friend finished both of them right in the nick of time. I placed my order, choosing the cheapest shipping option, but being so close to where GrogTag’s are shipped, my order arrived the next day! 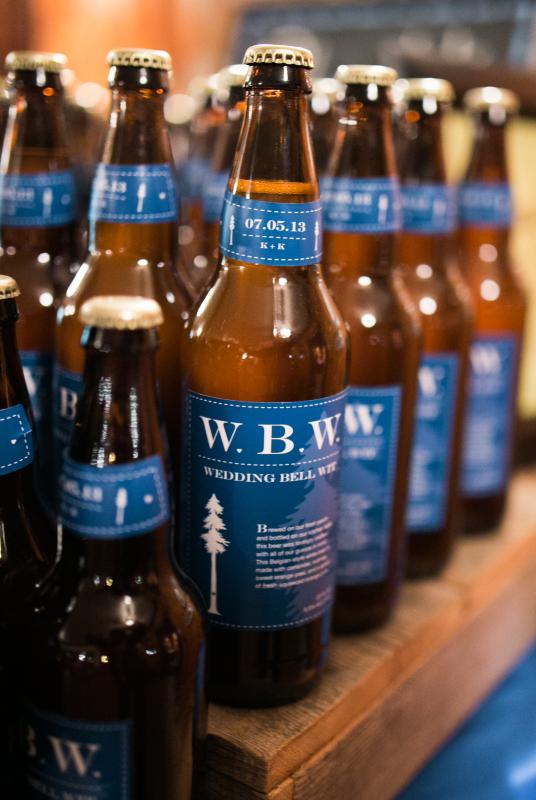 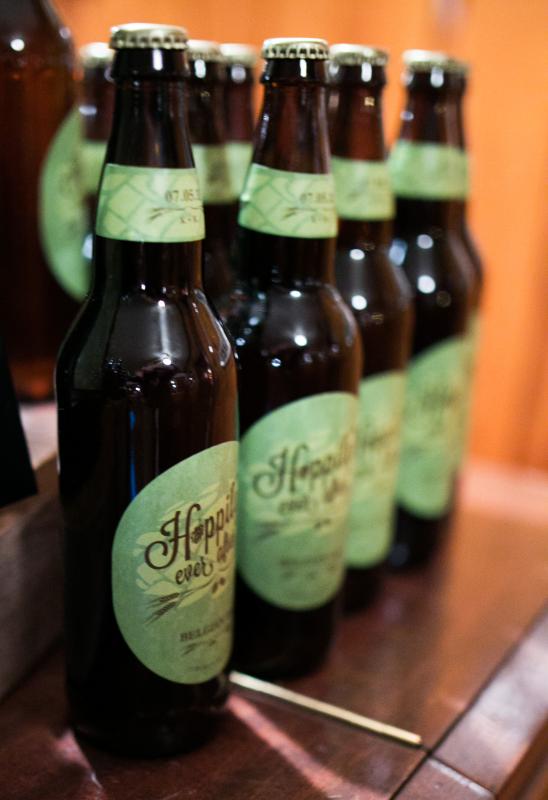 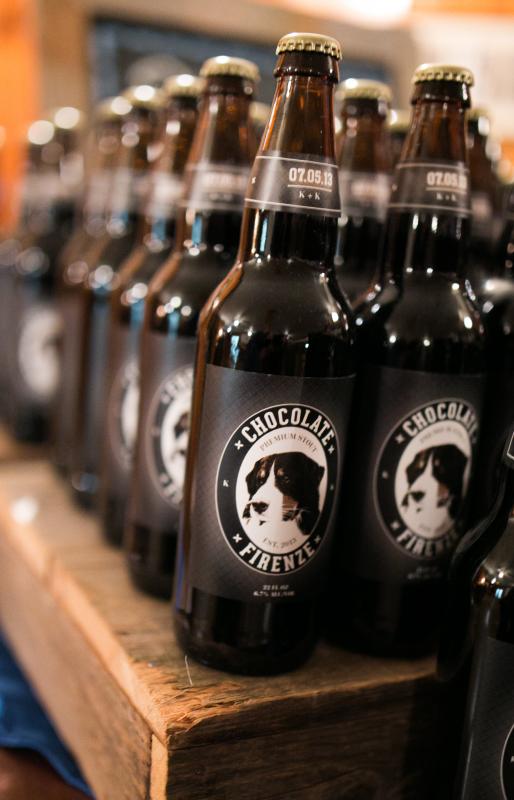 The labels looked incredible; they turned out even better than I imagined they would when seeing them on my computer screen. The final step of preparation for my homebrewed wedding favors was to bottle and label thirty gallons of beer. I knew this was going to be a daunting task, but the only prior experience I have had bottling was five bottles that I did when I first got my Blichmann bottling gun over a year ago. I knew I was going to need help bottling and labeling over 160 22oz bottles and I only had a short window of my wedding, one week! The three beers were all going to be finished carbonating at different times, which would mean that I would have to do three different bottling/labeling sessions. This was too big of a task to take on with just my fiancée and , I had to enlist the help of my friends. I had already gone through the arduous task of doing a deep PBW soak to clean the bottles and get them but they still needed to be sanitized. I put together an assembly line of four people, the first person was in charge of sanitizing, the second person was in charge of filling the bottles with the Blichmann bottling gun, the third person was in charge of capping the beers, and the last person was in charge of wiping the bottles down to rinse off any extra beer that had escaped while filling. This worked out great, albeit slow due to the nature of counter pressure bottle fillers, until it came time to label. Since I was bottling my beers from a keg the beer was quite cold, below 40 degrees Fahrenheit, so after we were done bottling the 45 that we yielded from the first batch there was a nice layer of condensation on the cold bottles. This meant that labeling was quite difficult since GrogTag specifically recommends that you label on a clean, DRY, bottle in order for the adhesive to stick. Lesson it is better to label before you fill the bottles up, rather than after. The other two bottling/labeling parties went smoother and two days before my wedding I had 150 22oz bombers filled, labeled, and boxed up in my fermentation freezer.

The day of my wedding was a blur, I had to chug a lot of alcohol to calm my nerves, and spoke to many, many people for a brief amount of time. Right before the guests were to leave my beer was near the exit of the venue. I even had my graphic design friend enlarge the label designs and he printed and framed them to put in front of the beers. Something tells me that GrogTag will have a better option coming soon. I spent a good portion of the night drunkenly explaining recipe designs, ingredients, and brewing technique to every guest who was leaving (and I’m sure didn’t care about beer as much as me) and made sure they grabbed a bottle.

The amount of planning, brewing, bottling, designing, and labeling man-hours that went into my homebrew wedding favors must have been nearing 100 but I don’t regret a thing. The weeks following my wedding I was tagged in many Facebook pictures of people enjoying my homebrew with their family and friends and they all seemed to love it. Any other wedding favor would have been forgotten after the guests left the venue. I am glad I decided to brew beer for my wedding favors and I am happy that GrogTag was able to provide me with professional quality labels to do so.